Having refurbished my old drum carder I am using it a lot. I think it was made locally, according to information stamped inside the drum, but I bought it second-hand many years ago as I am a sucker for textile equipment, but haven’t really used it.

I have just found out that my drum carder was made by David Barnett, so is a Barnett Drum Carder. I had no idea it was such a gem! Thanks for this information go to Louisa, who wrote about her uncle David Barnett on her blog , Knitting Revolution.)

Sadly this drum carder needed lots of TLC in the form of: four new rubber feet, stripping down, drum and licker-in off, old fibre removed from the cogs and a new drive band fitted – all followed by a good clean. There was, of course, loads of ancient, grubby fibre caught in the drum and licker-in.

The whole frame is a bit lopsided, I think this is because a rubber foot has been missing for a long time and the wood joints have adjusted to the uneven position. So I’ve compensated by adding an extra rubber foot which seems to even it up. Not a perfect solution, but I didn’t want to start fiddling with the joints.

At some point it has lost its feeder tray, so I have made a new one out of thick card which seems to work OK until I can get a wooden one made. The clamps have never been with it, so I bought two new ones from the nice helpful people at Classic Carders who made them especially for me due to the depth I needed. Unfortunately, as my carder is not made by Classic Carders I had overlooked the fact that the hole is in a different position, so the top arm was too long and protruded through the spokes of the drum, preventing it from revolving. Luckily my handy husband was able to cut it to fit and it’s fine now.

As there is no compacting brush on the drum I have acquired an 8″ decorating brush which does the job well. The beauty of this is you can use it above the licker-in or at the rear of the drum depending on what you want to achieve. The final tools I’ve added are a rubber door wedge to hold the drum still whilst I remove the batt, and two thin, odd knitting needles, (there always plenty of those in my house). Of these one is metal, for doffing the batt and the other is wooden. I sharpened this one in a pencil sharpener and sanded it to a point, and it’s perfect for (carefully) picking fibres out of the teeth of the drum and my hand carders.

I use a home made heckle and dog combs to pick the fibre before carding, but my lovely husband has just offered to buy me a pendulum picker for an anniversary present. I did remember to demure and ask ‘are to sure?’ before quickly pressing ‘submit’ on the order form!

It won’t arrive for a week or so, and I am already excited.

Meanwhile I have been carding in the garden, it’s so much easier than indoors as I put the debris straight in the compost bin and any odd fluff gets left. Shame we have so few windless days to do this. 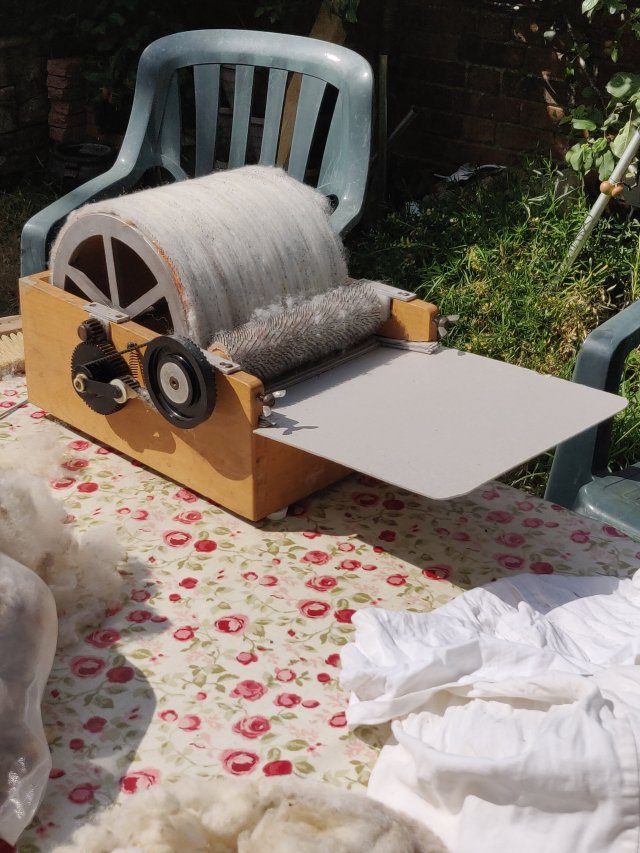 All set up and going. Here I am testing the process with an old Jacobs fleece.

Doffing the fibre batt with my trusty metal knitting needle. 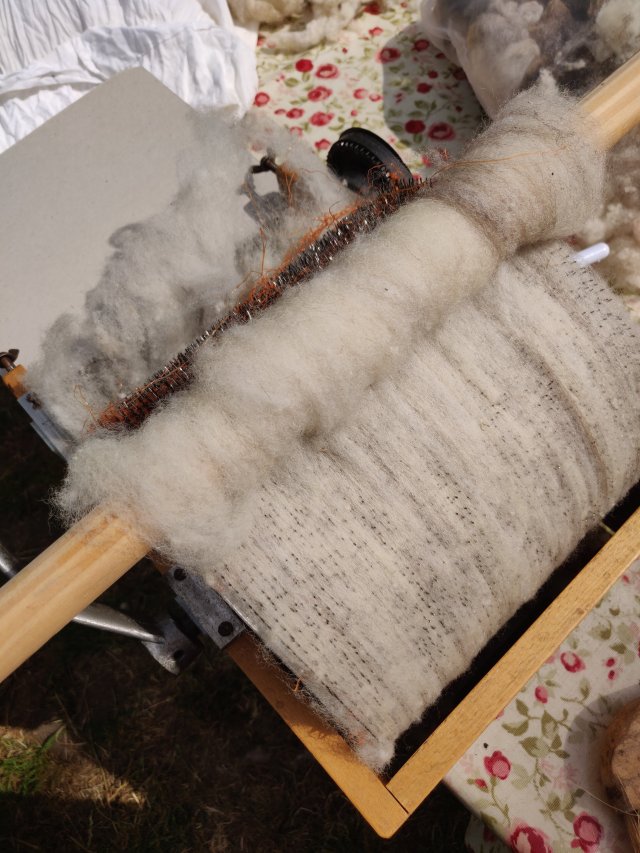 Taking the batt off on a dowel

In this session I made large batts and split them into roving later on. Other times I take it off as several rolags, getting between 6-8 per batt, depending on thickness of the batt. 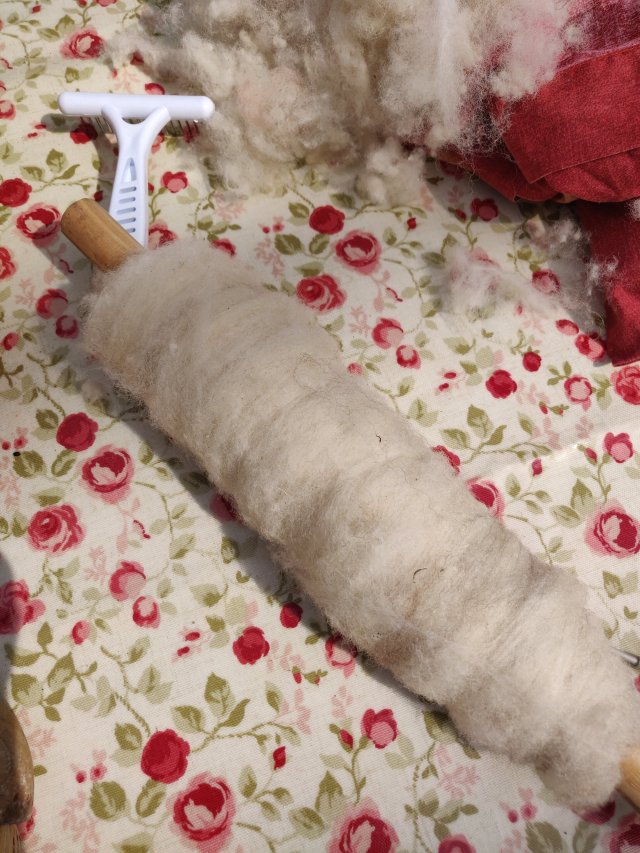 A bit lumpy, but a rolag!

Having used the drum carder a lot recently, and done a bit more research, I think the carding cloth has at some point been rather damaged. Maybe someone forced matted fleece through, or used it with the teeth of drum and licker-in meshed together? Who knows, but the result is that many of the teeth are bent and some are mashed into the cloth or maybe even missing. I found a site that recommended trying to straighten bent teeth with an empty mechanical pencil, so I will try that, but there are lots to try to fix.

My batts and rolags have improved as I have practised, and picking the fleece thoroughly makes a huge difference, but I think I will aim to replace the carding cloth at some point. 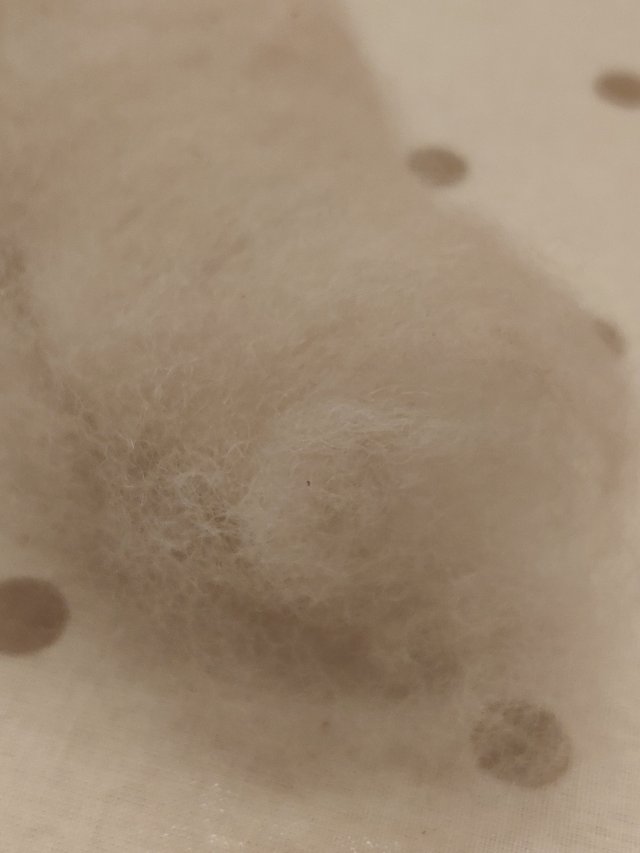 A much better rolag