I have replaced the LED strip lights my son originally fitted to the underside of the arm of my Bernina 1030 sewing machine. These had to come off when the machine blew it’s circuit board and needed repairing. They lost their stickiness, and as the set-up had never been very satisfactory due to lots of wires I looked for a better design. This new configuration of lights in series came from a YouTube video tutorial here: http://youtu.be/7J91Z9rngE0. The tutorial is very clear and simple to understand.

I bought LED light strips from Maplin (20cm length with 12 LEDs in all in multiples of 3 and which I cut up into 2×6 lengths). I chose the non-waterproof as these mould to the curve better than the plastic coated ones I have tried before. I will see if they catch on the cloth more or get damaged easily – the reasons I originally chose the plastic coated version. These cost £5, the little plug was from the original lights and had cost £1.20 and the wires were odds we had around. The transformer from the original lights was from an old telephone.
My kind husband helped with the soldering having watched me having problems as the soldering iron would not melt the solder. It was only when we searched this up online that we realised the tip was likely corroded and a new one needed. After a trip to Maplin and £7.99 for new tips it was plain sailing.
It works a treat, and the minimal wires are all held tidily at the back with sticky-backed Velcro cable strips, plus the wire to the transformer is easily removable to allow the machine to fit into the solid plastic cover that comes with the Bernina 1030. The Velcro strips were £4.15 for 10, and although I considered using Sugru to make cable clips I decided to spend the money on these instead. 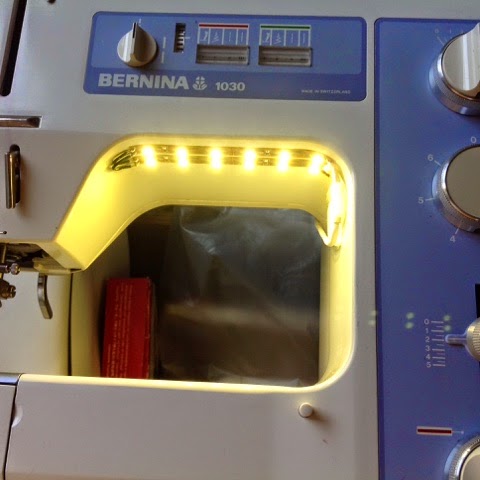 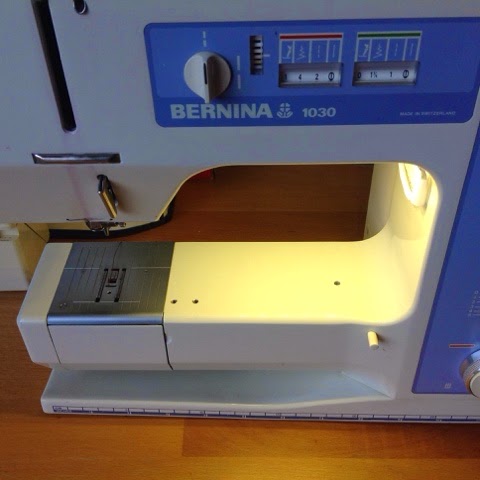 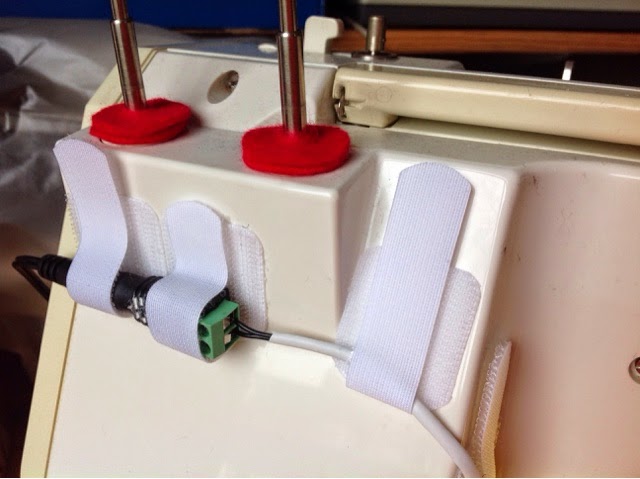 I bought the 4 original strip LEDs from eBay with the wires already soldered on. However this, and the fact that the seller had cut off the little copper terminals at the opposite end meant they had to be wired in parallel and

rendered it impossible to now put them into series. Wiring them up and attaching them in parallel onto the machine looked messy as there was so much wire, and four strips was really overkill.
Two strips seem more then adequate this time. I could of course buy some more and add another two to the existing two if I find it necessary, or even use one of the waterproof strips if I take off the old wiring. As you can see, even without its own two lights illuminated there is a much better field of light for working on black fabric and at night.
Whilst installing the lights on the machine I managed to break one of the solder joints, but easily re-soldered it.
So just to mention, when the machine blew up (hmmm, that was fun), white smoke and stink of melting plastic… I found a really helpful machine repair workshop in Portsmouth, Hampshire called Sueco who fixed and serviced the machine for what was a shocking figure; but far less than the cost of replacing a Bernina of this quality at today’s prices. They were the only local company of the many I called who a) knew what the problem I was describing was likely to be b) confidently said they would be able to fix it and  c) could give me a rough estimate for the job. So thank-you Sueco! It now sews smoothly and quietly and, let’s hope, for a long time to come.

One thought on “Illuminated Bernina 1030”