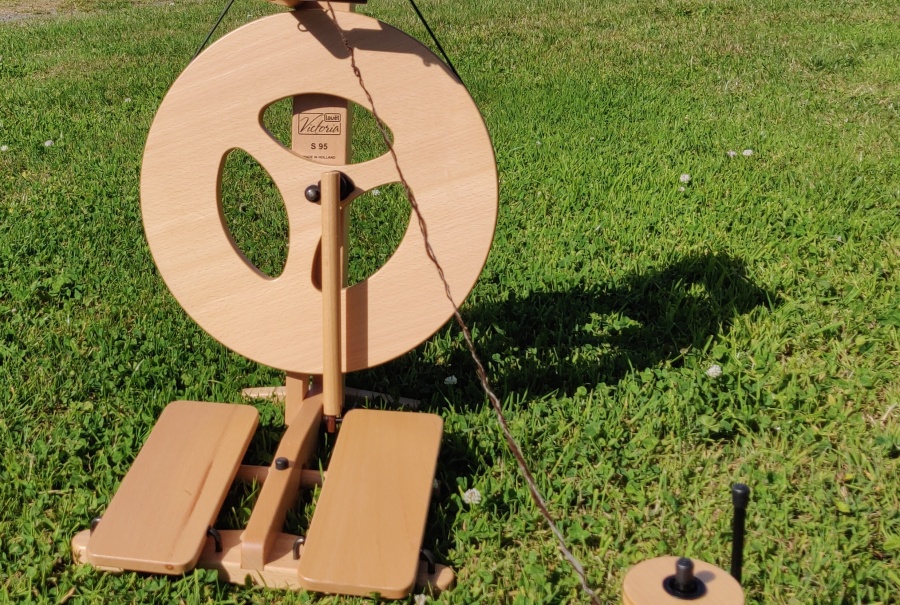 A bit like outdoor anything – providing its not raining or freezing – spinning is enhanced by the open-air. I took my little Louet wheel with me whilst on holiday on the Pembroke coast recently. We were being careful and avoiding towns etc in our caravan sitting on a farm, so there was plenty of opportunity to spin in the lovely sunshine. It seems ages ago now, but was so refreshing.

I took a bag full of mixed colour Jacob’s fleece and sorted it into dark and light before hand carding it. Ifirst of all spun a skein of cream to test the tpi and grist I was aiming at and on a rainy day decided to dye it with the onion skins from our soup.

I can’t resist a marl yarn, so plied the colours into variations on this.

My brother sent me photo of a photo he found of our Dad. It is such a lovely photo of him I felt it was worth spending a bit of time editing the rather hasty phone photo into a more attractive format.

I guess Dad was about 20 in this photo, and was wearing his signature tweed jacket even at that age. He fought in the Second World War, and was stationed in Hong Kong and captured when the Japanese overran it on Christmas day 1941. After being kept prisoner in Shamshuipo Camp he was sent to Shanghai in the following Autumn on the Lisbon Maru along with 1816 other prisoners.

The Lisbon Maru was torpedoed by U.S.S. Grouper on 30th September 1942. This mistaken was apparently because the ship did not display any indication of carrying POWs – it would have been normal practise to displayed some sign to prevent such disasters. Of these men, only 973 survived the sinking of the ship – 46% (843) of the prisoners died by some means or other.

Eventually the Japanese soldiers were transferred to another ship (taking all the lifeboats with them) and the prisoners battened down into the holds, and effectively left to drown. It was only their own resourcefulness that enabled some to escape, but a skeleton crew of guards shot those who tried to leave the hold until enough emerged to overpower them. Those prisoners who entered the water were not picked up by the Japanese naval boats until much, much later. This was after many had drowned, some pushed back into the water even if they managed to get on to a military boat, and some seemed to have been shot at.

Meanwhile local fishermen realised that the men in the water were POWs and set out to help them. Japanese fishermen’s families apparently treated those they rescued (around 200) with kindness and even arranged for three to escape.

Even after the Japanese navy reluctantly rescued the remaining POWs, they did not give them succour, but left the wet, exhausted and sick men on the deck so that some died of exposure. Luckily my Dad survived, and was shipped to Shanghai, and then to a prison camp where he spent the remainder of the war in the East. He kept some records, and wrote about his ordeal from memory, and it is a harrowing read. He did not talk to us about it, and it is only since his death that we have learned much of his story.

Like most survivors of such horrors, he was physically and emotionally scarred for the rest of his life.

The Sinking of the Lisbon Maru, Tony Baham