A while ago I posted about this new acquisition. I’ve not been able to use it much recently as I have two knitting machines up. I’m busy writing my latest book on machine knitting which has to take priority.

Before going any further I must point out that the machine now had been rewired and has a new for pedal, so is not as precariously wired as in the photo any longer.

However, I need to plant out my tomato plants and have to make grow bags for them, so it out came! I’d forgotten how great it is to sew with. It went through six layers of hessian without batting an eyelid. The big ‘but’ was that I had forgotten it’s little foibles.

When start a seam on my Bernina I go forward, back and then sew the seam. Singer-babe is different, she needs special measures. To prevent that worrying sounds of jammed threads in the bobbin and a jammed feed, I’ve learned to drop the foot 1cm or so into the seam, sew backwards and then go forward. The manual clearly explains this point, but who reads manuals? Once I remembered this, all went well.

I’m still annoyed that I can’t get her to use metal bobbins. Plastic ones were in the box when I got the machine, and I really dislike these. So I invested in several metal ones to fit, but they don’t work well at all. I’ve adjusted bottom and top tensions to try to get a good stitch, not nothing works. So it’s back to the plastic ones before they all go out the window.

Anyone else have this problem, or have any advice to offer?

I the problem I was having with the bobbin was that the thread was not looking over the bobbin, but catching around it instead. I found a video by Andy Tube on You Tube which explained how to check the thread gap on the bobbin case, which prompted me to check mine. Oh yes, it was way out.

I can see how this happens; the black spring that holds the bobbin case in place has a tempting little finger that looks as if it should be used to lift the spring up. BUT DON’T. That is clearly one of the ways it can get out of line. So with the help of a feeler gauge and Andy’s helpful video I think I have largely fixed the problem.

Andy suggested that the bobbin case might be worn, and that also might be contributing to the thread dropping underneath. So I have ordered a new one. After all, it is probably 50 years old, ( this machine was made in the late 1950 early 60s. Maybe it’s had a new bobbin case in that time, but maybe it hasn’t!

I still haven’t solved why the zig zag stitch missed sometimes, that is my next challenge.

I think the zig zag daily is because the needle arm is slightly out of line. Another Andy Tube video shows how to fix this, so that my next challenge.

I’ve been having problems with adjusting the foot pressure on my Jones 125 machine. I’ve not seen one like it before and couldn’t work out how to use it. Today I’ve had 3 broken needles and I traced this to the really strong pressure on the foot. My Bernina 1030 doesn’t have this adjustment so it’s not something I work with much.

Then I lucked upon this webpage https://aspenleitervacuum.com/under-pressure-the-adjustment-you-didnt-know-you-had/

Before reading this I’d been twiddling it, popping it up, trying to unscrew it and seeing no difference. After reading this helpful page, it seems the Jones has a ‘pop darner’ style pressure adjuster. The central core pops up when you push down the outer ring, and then you depress the central core in increments to achieve the pressure you want. I imagine the name comes from popping it up to take pressure off when darning (or free embroidering) on the machine. Suddenly it all makes sense. The 3/4 position is so much better for what I am sewing today than all the way down, where it was because I couldn’t work out how to adjust it.

Probably common sense to others, but not to me!

Thank you to the kind person who took the time to write about the different methods of adjusting foot pressure, and for such a clear explanation.

I was lucky enought to find this charming old Reynolds sewing machine in a boot sale. the wooden base has obviously been sat in water, so has some damage, but only slight. I was thrilled to find a bobbin in the machine and a spare in the accessory box along with a couple of new needles. After a thorough oil it works fine, and looks lovely. 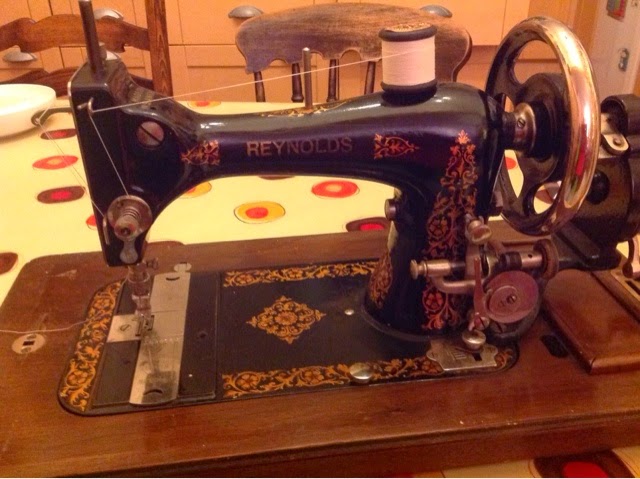