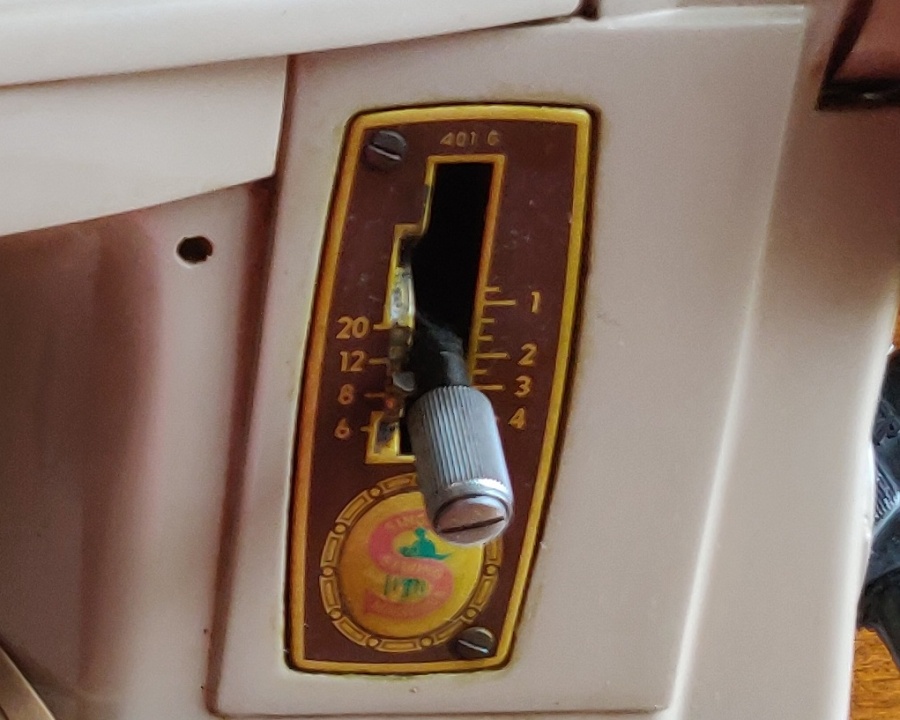 I have been toying with the idea of buying a Singer slant shank machine for a while, and during lockdown I took a punt and bought one reasonably local on eBay. Not the smartest move you might say, sight unseen and all that. I spent quite a time scrutinising the photos very carefully, read up about the machine, and asked lots of questions of the seller. Call it a treat to myself.

And below, after a good clean up 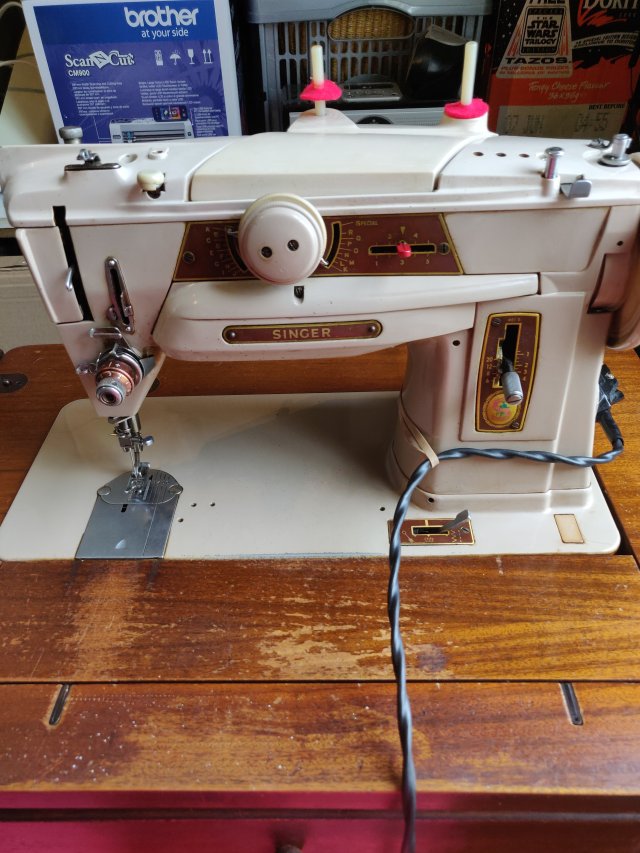 Finally I went to collect it – social distanced collecting methods in use and no stopping en route. Its outside is a bit grubby, but its working and has all its accessories down to the lint brush and set of screwdrivers. Its obviously well used, it was owned by a dressmaker before, but I would guess not used for several years. However, its got service labels and having all its accessories indicates to me that it was well cared for and valued. It came in a drop down table, which was perfect as wanted one in a table, but not a massive cabinet.So far I’ve opened it up and cleaned its insides, removed as much old gummy oil – or as I can reach – and given it a thorough oil with light sewing machine oil. The double direction pattern dial was gummed up, and this gentle cleaning and oiling helped to loosen it up so that I could (very carefully) encourage it to move, and now it works freely. Its fascinating to see how the selection mechanism works, not that I am an expert at mechanics, but I can see the little paddle moving and the rise and fall of the selector post (probably the wrong name). I am itching to try out all those amazing built in patterns. I can’t right now as you will see in the next paragraph.The original clam-shell foot pedal is with it, and it did work – sporadically. After a while there was a nasty smell (reminded me of when my Bernina 1030 went into melt down, and when my Brother 950i knitting machine and very, very vintage Kenwood Chef did the same) and the machine would not stop running. Luckily the plug was close to me, so I whipped it out to the socket before any damage was done.My clever son opened the pedal and told me I should have cleaned that out (didn’t even think of it, sorry), and then he replaced a blown capacitor – he is pretty nifty at this and has a stock of electrical bits. The pedal now works – but the connection from the pedal lead to that ‘banana’ plug is dodgy. In addition some of the old plastic has broken away inside the pedal and the plug has a chunk missing which worries me. I’m not confident around electricity having had a few experiences that unnerved me, (see above). He offered to repair the lead and plug (he thought Sugru) and will in time, but I decided to order a replacement so that I could use the machine until then. I will compare them to find which gives the best speed control as some reports say new ones are not as sensitive.The motor seems OK, and my son will clean it at some point. So far the machine has displayed a lovely straight stitch – equal if not better than my Bernina 1030, and far better than the Jones 125.I did hanker after a Singer 411g or 431g but I think the 401g will satisfy me. It was only the chain stitch of these I wanted, but reading about it it sounds to require lot of fiddling to get it right and so that do you leave the machine set up just for that? Seems a waste to me, so I’ve let that wish go for the moment. I also think I remember that my Janome Coverstitch machine will do chain stitch, so maybe that is something to explore. I’m not even sure why I want chain stitch – I’m just a machine nerd (maybe?).Want this space for more chats about the Singer 401g that has joined my machine stable. Its going to be sewing frontline masks once the new pedal arrives.

Today I’ve been sewing a jersey dress, and the fabric is a double-sided tubular jacquard which has very fine yarn loops that are easy to pull. When I was cutting it out I found that the pins points were catching the fine knit threads, even breaking one and making a hole so I had to move the whole pattern around – not much fun! I usually weight the pattern pieces and don’t pin, but this fabric is over stretchy for this, hence the pins.

So now I’m sewing-up the dress, I’m testing out using Clover Wonder Clips rather than pins to hold the seams together. These clips have made joining the seams very easy and seem to be a really good addition to my equipment. They have a flat back and a curved jaw with a ridge at the point that grips the fabric securely. The flat side makes it very easy to slide the clip under the fabric without disturbing it. On this flat side they also have measurement lines marked out to help keep a straight seam.

I’ve already used them to hold knitted pieces together when hand sewing them and they work extremely well for this, there are no pins drop out onto the floor for the dog to tread on!

I also used the little ones to clip long yarn tails (I keep them long to use for sewing-up), to both hand and machine knitting whilst I work. Yes I could use binder clips or bulldog clips or clothes pegs for this, and I still do, but I find the Wonder Clips grip more firmly and they look a lot nicer. They’re also not as heavy as the binder clip so don’t drag the knitting down.

Overall I’m really pleased with the way they work, and now have three sizes to work with. Their bright ‘jelly’ colours cheer me up on a grey day!

Sewing towards the Wonder Clips – I’m using a walking foot in my Bernina 1030 in this photo.

I have been using snap-on feet on my Bernina 730 and 1030 machines for years with the aid of a clip-on adaptor screwed onto a low-shank Bernina adaptor. This combination allows me take the adaptor apart and use the low shank adaptor to attach low shank feet, such as a ruffler.

Bernina feet, whilst clearly the best option, are exorbitantly expensive and I can’t justify this cost for some of the more exotic feet that I may only use for part of one project.

Through the years I have also acquired a Bernina clip -on adaptor with a metal lever at the back with which to ‘clip’ the clip-on feet to it, which is also brilliant at the job but obviously lacks versatility as it doesn’t allow for low shank feet to be used.

Recently I bought a set of 48 (? I think), clip-on feet to expand my collection at a reasonable price, and another ‘Bernina style’ clip-on adaptor which has a red plastic lever at the back rather than a metal one. Now for the weird bit.

I used the knit foot and then the cording foot from the new set, both with the combination adaptor, and all was well. Then the next time I sewed, I attached the rolled hemming foot to the machine using the adaptor with the red lever, and the needle smashed into the foot. Not having used this foot before, I thought the foot was a fault, and so, being in a hurry I sewed the hem with the standard foot instead.

Today I attached the knit foot to the machine, and picked up the adaptor with the red lever as it was at the top of the box in which I keep the clip-on feet. Lo and behold, when I started to sew (with a straight stitch), the needle collided with the centre plate of the foot and smashed! I was confused, this foot had worked last time, what was the problem! Having forgotten which adaptor I had used last time I spent some time fiddling around checking what could be wrong with the machine. Then I thought about it a bit more, and realised I’d most likely used the combination adaptor as this is always stored in the actual machine’s own accessory box. I swapped the adaptors, and sure enough, no collision and no broken needle.

A little analysis and test-driving was needed, and after re-checking it seems that the red-lever adaptor positions some clip-on feet too far forward, so that the machine needle hits the centre plate of the foot. I haven’t tested all the clip-on feet with both adaptors yet, but have written big notices one the storage box, machine and accessory box to remind myself to use the combination adaptor with the knit foot and roller hem foot, and to check any others carefully before starting to sew.